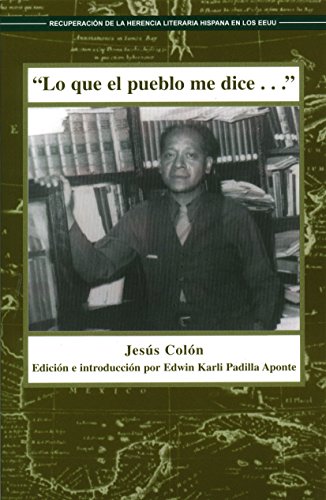 Jesús Colón was the most prolific and influential Hispanic columnist in early twentieth century New York. For five decades this self-taught intellectual wrote incisive journalistic commentary from Hispanic working-class (and later Afro-American) perspective. Colón was also a Puerto Rican political activist who was untiring in organizing immigrant communities.
Lo que el pueblo me dice is the first compilation of his Spanish-language crónicas (journalistic chronicles of everyday life), including the various series that he wrote from the 1920s to the 1940s under the pseudonyms Miquis Tiquis and Pericles Espadas as well as those published under his own name. The three decades of writing represented reflects the development of the Hispanic community in the city, its primary concerns, hopes and aspirations, as well as its pitfalls and conflicts.
University of Houston Professor Edwin Padilla, who is writing his Ph.D. dissertation on Colón, has provided an excellent introduction with a detailed analysis of the crónicas from within their socio-historical framework.